skip to main | skip to sidebar

Upcoming Shows - In the Works:

Tuesday night -
It's OFFICIAL "Refugee Nation" in lights on the sign outside IntermediaArts in Minneapolis!

but let's back track a bit to where the adventure began... 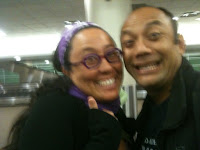 Sunday - We arrived blurry eye'd and bushy tailed at the MSP airport after a long day of travel. 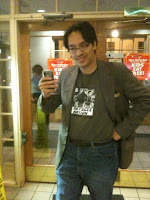 In search of provisions we stopped by a 24 hour grocery store and Ova saw his first Rutabugah (he was excited).

It was late and since the airplanes no longer offer meals we were HUNGRY. So found ourselves getting Grand Slammed at Denny's. Thankfully our bellies were happy. 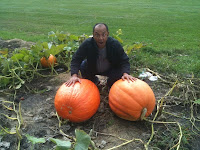 Monday - we were had a chance to walk around Brooklyn Park the neighborhood we are staying in and came across this pumpkin patch with huge pumpkins (Ova was excited).

Tuesday - Our first production meeting with the full team. The Bryan, May Lee, Katie, Theresa, Julie, Jake & Mike. Pictures to come. Legacies team is hard at work in the gallery with the installation. Ova and Leilani begin to make the rounds stopping at the Lao Cultural Center and making announcements at IntermediaArts events going on in the cultural center. But the best was stopping by at house down the street from the house we were staying at in Brooklyn Park where the 3 generations of Laotians lived. Why where we there? How did we get there? Well it's all because of Ova's mom. When we were here in August we were picked up at the airport by Loy, and intern helping out at the Lao Writer's Summit. We later met her sister Bop at the Summit as well. But it was Loy and Bop's mother who came to the final day of presentations that made the connection. Their mother lived across the street form Ova's mother in Savannahkhet Laos! So of course the first chance we got was once we returned to MSP to go visit her and her family. And we did so tonight and let me tell it was the best moment of "community engagement" we've had so far. We got the full scoop from the 3 generations of Lao. Maa & Poh gave us the low down on the elders and where to find time tomorrow (aka NOON for lunch at the cultural center), Bop got the cards to go to two universities, and sister number 3, Bey, of course fed us and gave us the logistical facts including the detail that there is a wedding and a birthday party this weekend where RN postcards will need to passed out vigorously (major intel people!). And of course we got an invite to return for a proper dinner tomorrow night. Litdet and Rena arrive Wed evening just in time to part take in real Lao meal. Hope the arrive as hungry as we did.